Networking can be defined as the act of interacting with others in order to exchange information and improve social contacts.

The very definition of the term networking reiterates its importance for students and working professionals.

Networking for working professionals means building your social contacts for mutual benefits in business. On the other hand, networking for students in college is important in order to build a strong foundation for your career. 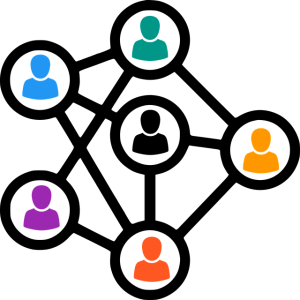 There are various types of networking. While one method may work best for you, others may not. It is best to experiment which way works for your personality.

Personal networks are more individual and unique. Personal networking is more of a one to one interaction with people. It is defined by a unique bond between you and the particular person.

General networks are more widespread in nature. These contacts are more formal than personal.

In general networking, it is not essential to know the other person on a personal level. You may be just an acquaintance but it is also a type of networking.

Though both these types of networking are equally important, they both have their distinct charm.

The Importance of Networking in College

Networking from your early days in college will prove beneficial to you in your future. It helps you pave a long and successful path for your career.

Networking allows you to get noticed. As networking essentially means improving your social skills, it implies that more people will get to know you. Allowing yourself to get noticed is one of the greatest steps to building a career.

Acquainting yourself with one person can link you to another. When people notice you, the word goes around.

You will be surprised at the number of people that may know you even without being introduced personally to you. That is the magic about networking.

One of the reasons why networking is important is because it is a self confidence builder. Networking essentially involves communication with others.

The more you communicate and interact with others, the more you build your confidence. Take for example your first stage performance and your performances after a while.

Notice how scared and worried you were while performing for the first time on stage. However, now, after giving many performances, you have improved in your communication and your confidence is soaring high.

Networking works on the same principle. The more you network, the higher your confidence.

Meeting more people keeps you in constant communication mode. Each day will be an improvement from the previous day. As you socialise more, the more confident it makes you.

The importance of networking in education can be seen in the fact that networking is a mode of learning new ideas, languages and concepts from others.

Networking does not limit communication to a few people. In fact networking essentially means socialising with a wide range of people.

These people may be from different social strata, diverse language backgrounds with different thought processes. Interacting with all these people helps you to learn from each and everyone.

The experience you gain from interacting with innumerable people is unmeasurable. Everyone you meet will know something you don’t.

As you communicate with a number of people from diverse backgrounds, you learn new languages that transcend all boundaries.

As a professional you are now expected to interact and communicate with people from different departments, clients and customers. Networking at early age can help you improve your communication skills

According to a survey conducted by linkedIn in 2017, eighty percent of the people consider networking an important part of their careers.

Newspaper advertisements are not the only way through which people apply for jobs. Most of the time it is contacts that help you to get a job.

Vacancies in a company are usually filled up by professionals who have a good networking base. The same LinkedIn Global survey also stated that 70% of the working professionals in a company in 2016 were hired through some connection they had with the company.

That is, they either knew someone who recommended the vacant post or had some sort of beneficial networking within the company.

With good networking you can even get a job before the advertisement of vacancies appears.

You May Also Like Job Seeking Tips and Techniques

6. Advice from Seniors in Your Network

When you network, you do not socialise with only people in your field or people of your age or gender. Networking essentially disregards any of these social classifications.

Interacting with all these different types of people, allows you to learn from their experience. You can also seek advice from peers or seniors in your network before making major career choices.

Graduating from college and gaining a degree does not mean that learning has come to an end. Learning is a continuous process.

So much so, that even after you get yourself a job, you are expected to learn from your colleagues and seniors.

This learning becomes possible only if your network is good. This is the importance of networking and relationship building.

7. Serves as An Advertisement of Your Skills

Networking serves as an advertising platform for your skills. As you network and socialise with others, you inform others about your skills.

Conversations with others serve as an advertising platform for your skills. As you speak and communicate people get to know what you specialise in.

They may take note of this and next time they need your professional skills, you may be the first one they contact.

Socialising or networking with others maintains a good psychological balance. An oracle published in Psychology Today mention the different health benefits of socialising.

The article goes on to state that socialising can boost brain health and stronger immune systems.

9. Helps You Stand out From the Rest

The importance of networking in career development can be seen in the fact that networking allows you to stand out from the rest.

Remember there are always thousands of people with the same qualifications as you. So what can you do that will make you stand out from the rest? Networking.

Yes, networking with others allows you to have a better chance at an opportunity.

How Do You Network?

Now that you know the importance of networking, the question now arises, how do you network or how do you start networking?

Effective networking strategies and skills can not be achieved overnight. These skills must be developed and sharpened over the years.

Networking is not possible without a two way communication. Networking essentially involves talking and listening.

Without you being part of someone else’s network, you may not be able to find a place in their network branch. Therefore, it is essential to be approachable to others just as you would want them to accept your network invite.

There are many networking agencies and clubs that promote business networking. These agencies are formed for the purpose of improving networking for businesses.

Some  examples of a networking agencies:

When using these social networking platforms you come across various groups that are formed for a particular purpose. Joining these groups can prove to be advantageous for you in future.

Another great way to achieve effective networking strategies and skills is to participate actively in activities around you.

The activities may seem insignificant at that point but always remember that participating in these activities will help you at some point in future. Especially with your networking skills.

Volunteering at local help points is another great way to network. When you volunteer you do so without a benefit to yourself.

However, there is always an advantage that you may not see immediately, but in the near or far future.

One of the very important points to remember is to never dismiss anyone as unimportant. Always consider everyone you meet an integral part of your social network.

A simple hello may go a long way. At the same time, always be available to others as part of their social network plan. Networking is all about helping others. Ask not what they can do for you, but what you can do for them.

Networking is an essential part of building your career. It is the number 1 unwritten rule of success. Networking is not about collecting contacts but about building relationships.

You May Also Like Why Social Work Is Important?