The ancient history of India speaks volumes of the rich traditional and cultural heritage of the country. One of the best-known traditions of the past was the unique Gurukul System of Education.

The word Gurukula or Gurukulam is a combination of two words, Guru meaning teacher and Kula meaning family or home.

Thus, the term gurukula translates to ‘the home of the teacher.’ This is exactly what the gurukula was- A home for pupils or shishyas to learn and acquire knowledge.

One of the earliest mentions of the Gurukul System of Education was in the Vedas and Upanishads. This system of education was in existence since ancient times.

The Upanishads mention the gurukul of Dronacharya in the present city of Gurgaon.

Several scholars and travellers of the ancient period wrote volumes and praises of the education system prevalent in India during the time.

The Gurukul System of education was one of the earliest systems of education in South Asia till the advent of the British school of thought.

Characteristics Unique to The Gurukul System

The education imparted under the Gurukul system was highly influenced by the cultural and religious practices at that time.

Since this system of education developed during the vedic period, the main sources of teaching came through the Vedas, Puranas and other religious texts.

These texts served as a model or standard for the way the students must learn and act.

Importance was given to the all round development of shishyas in the Gurukul System of education.

The pupils were not only taught theory through ancient texts but also trained in physical fitness and taught how to manage day to day living.

Students were made to perform daily chores and engage in activities like singing, dancing, craft, sports and yoga. This ensured the holistic development of the students in the Gurukul.

One of the main features of the Gurukul system of education is the concept of Gurudakshina or a token of respect to the Guru. It serves as an acknowledgment of gratitude and respect to the teacher.

Gurudakshina, during the ancient times took many forms. It could be a monetary token, or a token in kind. Many times the guru may ask the pupil to perform certain tasks as a form of Guru dakshina.

A unique element of this system of education was that students would have to beg for alms from nearby village homes to sustain themselves during their years in the Gurukul.

This practice of begging of alms taught the students to be humble and respectful.

What Exactly Is the Gurukul System of Education? 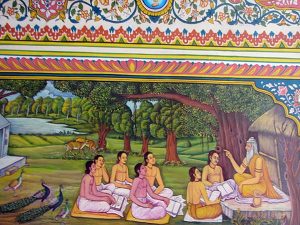 The Gurukul system of education in the Vedic period referred to a residential type of schooling, where the shishyas would reside in or near the Gurus home and acquire knowledge from the teacher.

Not only would the pupils acquire knowledge on various subjects taught, but would also learn the way of life. Everyone was considered equal in a Gurukul.

Subjects Taught in The Gurukul System of Education

It included the holistic development of students.  Focus was on the moral, physical and spiritual wellbeing of the students.

The teachings in Gurukuls encompassed all aspects of life, be it in the physical sense or mental. Students were being taught to co-exist with nature.

With these being taught as subjects in the ancient education system, you may wonder what were the sources of information from where teachers taught and pupils learned.

Like today, students have textbooks to refer to the ancient gurukul system also depended on ancient texts like the Vedas, Upanishads, Dharmasutras and Brahmanas.

Apart from the knowledge of Mathematics and various sciences, the shishyas were trained in yoga, exercises, physical labour, games, archery, martial arts and sports.

The routine followed in Gurukuls was rigid. Students followed a set timetable. This ensured discipline and regulation in the lives of all the students.

A typical day in a gurukul would start in the early hours of sunrise and include chores like cleaning, cooking and physical fitness.

Shishyas were not only taught concepts from the texts but were also trained in regular activities that promoted sustenance on a daily basis.

Under the gurukul system of education students were taught the way of life apart from core subjects.

Shishyas would lead simple and austere lives like their Gurus. They were expected to obey the Gurus with great reverence and veneration.

Therefore, it is safe to say that the ancient gurukul system of education was a way of life.

Gurukul System of Education in The Vedic Period

Though the ancient texts like the Vedas and Upanishads were sources of learning during the ancient system of education, it cannot be said that only the Vedas were taught in the Gurukuls.

The very fact that the Gurukuls existed and flourished during the Mughal rule, goes to show the inclusive character of the Gurukul System of Education.

This system of Education aimed at overall personality development and character formation.

Students would perform tasks that aimed at physical and mental wellbeing. Students were taught how-to live-in society with one another. Teachers monitored and observed the behaviour of students.

The Gurukul System of education in the Vedic period also stressed skill-building. Certain skills like pottery, cooking, cleaning and other art forms were taught to students.

Methods of Learning During the Gurukul System of Education 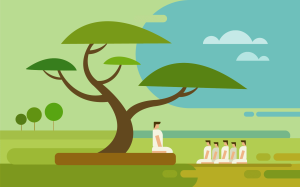 To ensure effective learning, pupils of Gurukuls had to recite the Vedas and other ancient texts daily. This guaranteed memorization of important parts of the texts.

Apart from recitals, students had a hands-on learning experience in Gurukuls. They would cook, clean and engage in certain skills.

Debates were not unknown during this period. Students deliberated and discussed certain topics. Pupils had to analyse and apply critical thinking on subject matters

Process of Admission in Gurukuls

Admission to Gurukuls was possible once the student has undergone the upanayana or the sacred thread ceremony. This usually took place at the age of 8 to 12 years.

After this, students were eligible to reside in the Gurukul. The pupils would generally go on to receive education for around 10 to 12 years.

Education Beyond the Gurukul

The extended part of Gurukuls was what we would call the modern-day universities.

Some of our texts contain information on famous universities like Taxila, Nalanda and Vikramshila. These served as centres for advanced learning.

One of the famous pupils of Taxila was the noted grammarian Panini. He became an expert in language and grammar and wrote the famous book Ashtadhyayi.

The ruins of Taxila were excavated in the mid-19th century in North-Western part of Pakistan. It is now a UNESCO World Heritage Site.

Education during ancient times was sacred. It was a venerated and revered field.  Due to its adulation, no fixed fee was charged to students.

This Guru Dakshina could be in the form of money or a certain task the teacher would require the student to complete.

Speaking of Guru Dakshina, an interesting story in the epic Mahabharatha speaks of Eklavya, a young prince of a jungle tribe.

In this story, Drona asks for Eklavya’s right thumb as Gurudakshina. Eklavya readily cuts of his right thumb and offers it as Guru Dakshina.

This shows the sacred and revered relationship between a teacher and a pupil in ancient times.

The advent of the Britishers changed the education scene in the country. The Gurukul system ended. The Britishers introduced their centralised system of education.

In 1886 they founded the Dayanand Anglo-Vedic Public Schools and Universities. The school revived the almost forgotten ancient system of education.

Slowly but surely, the school spread its wings to various parts of the country and even the rest of the world.

The relevance of the ancient gurukul system of education in today’s educational set up can not be forgotten.

Though the concept has undergone significant changes to keep up with modernisation, the basic theme of the gurukul system still stands today.

Even today, the concept of teaching students moral values has remained an integral part of the education system like the ancient times.

Almost forgotten over a period of time, schools today are reviving the need for physical fitness in the curriculum. Many schools today also entertain admissions based on sporting abilities of the student.

Emphasis is now given to the holistic development of students, keeping in mind mental and physical well being, just like the ancient practices in the gurukul system of education.

Another significant relevance of the gurukul system in today’s education is the concept of gurudakshina.

Known by many different names today, like fees or consideration, the underlying concept of gurudakshina has remained the same over the years. Such is the influence of the gurukul system on today’s education.

It essentially concentrated on the holistic development of every student. Modern scholars believe that students today, lack overall physical and mental development.